There are new items added to the mod as well which are crafted using the new ores. The items are repulsors, two wearable arc reactors, machine gun, drill, suitcase, and many more to come. 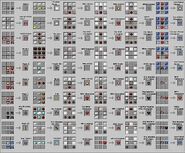 Add a photo to this gallery
Retrieved from "https://minecraft-modsmc.fandom.com/wiki/Iron_Man_Armors_Mod?oldid=4787"
Community content is available under CC-BY-SA unless otherwise noted.